Retail Price Watch, the consumer website which compares the prices of household groceries around the country, recently published a survey which demonstrated that locally produced bulk frozen chicken prices (dubbed “botox chicken” because of the high injected saline content) have indeed remained relatively stable over the past year.

However, Retail Price Watch searched for the cheap frozen chicken imports with which the market has supposedly been flooded – in vain.

“Legally, a producer must state country of origin and must declare anything that does not naturally occur in frozen chicken on the packaging, so it is relatively easy to establish whether it is local or not,” says Baker.

“South African chicken generally has a maximum of 15% injected brine based solution, while imported chicken has none,” she says.

“We conducted a comprehensive survey across major stores in the country and found that one chain, Food Lovers Market, is selling imported chicken from Brazil in its frozen bulk section, at a price per kg far higher than the local product (R42). A few 5kg packs from the USA were found in Cambridge and Makro at around R33 per kg. Local injected chicken is available at between R24 and R30 per kg.

“We spoke to Georg Southey, Chairman of the Association of Meat Importers and Exporters, and the owner of one of the largest chicken importers in the country, Merlog Foods, about where consumers might be able to find cheap frozen chicken.”

Southey said that cheap chicken is largely a myth, owing to a number of factors including the cost of refrigerated transport from overseas, duties, cold storage and conversion from bulk to consumer-friendly packaging.

“Additionally, imported chicken has not been injected with a saline solution, meaning that the consumer is getting more chicken per kilo, which may account for higher pricing,” he said.

Southey noted that imported chicken sales have been increasing, especially in the Eastern Cape, where “consumers are enjoying the benefits of choice”.

Imported bone-in chicken is mainly being used by the catering industry, he said.

Good news for consumers is that while some stores appear to have anticipated the mooted hike in tariffs, others have held the price of locally frozen chicken since last year. Baker believes it is important to shop around in order to take advantage of stable prices.

“If and when the government slaps a further 40% hike in tariffs on imported chicken, the price of local chicken can be expected to rise immediately,” says Southey. 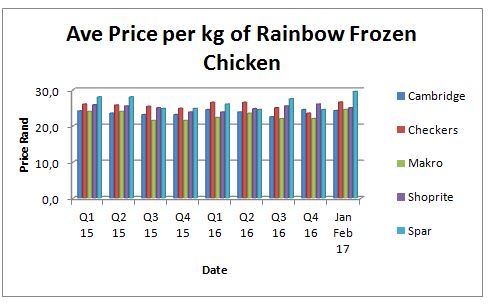