Looking at big business today, it is clear that although profit margins are still important, there has been a significant increase in campaigns that promote corporate social responsibility.

Although it might seem like CSR is a modern concept, it is something that has been incorporated into businesses for centuries. Anti-negligence codes around 1700 BC in Mesopotamia and taxes funding military campaigns in ancient Rome were the forerunners of the modern CSR movement.

With the increased environmental and social awareness that resulted from industrialisation came philanthropy, and the first big company to make CSR a part of its policies was Shell in 1998. You’d be hard-pressed to find any big company nowadays that hasn’t made CSR a priority.

What is corporate social responsibility?

Corporate social responsibility has evolved from the charity projects of yesteryear, and can now be sorted into a few broad categories:

This is probably the way you think of CSR: businesses donate money and resources to national and local charities.

Similar to philanthropy, businesses donate their time and human resources to support charities.

Of course, charity begins at home, and CSR also involves the fair and ethical treatment of employees.

This is an area of involvement that is especially popular among companies that have historically been dependent on natural resources.

Bearing in mind the consequences of global warming that are now more evident than ever, but not quite as evident as they’re still going to become, reducing a company’s carbon footprint not only benefits the company (in terms of things like carbon taxes), but also society in its entirety.

Why does corporate social responsibility matter?

Many companies have adopted the John Elkington’s ‘Triple Bottom Line’ as a part of their business plan and strategy. It comprises three dimensions: social (people), environmental (planet) and financial (profits).

The Triple Bottom Line is often difficult to measure because the 3 P’s don’t share a common unit of measurement, but experts agree that companies are likely to reap long-term benefits from using it.

This is key, because “sustainable” isn’t just a word that sounds current anymore – sustainability has become vital in a world where resources are becoming scarcer year after year. 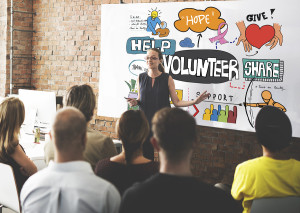 Companies that are leading the way

Fortune Magazine recently listed 50 big companies that are benefiting from their immense CSR projects. These include:

Nestlé uses its annual “Creating Shared Value” report to track projects like its iron-enhanced soup cubes that help to fight anemia in Africa, and fortifying its products with essential nutrients and minerals in middle- and low-income countries where these are in short supply.

Partnering with the UN High Commissioner for Refugees, Accenture has deployed a biometric identity management system, which has already enrolled 500 000 refugees in its databases. As many of the 65.3 million refugees lack documentation, this helps immensely with resettlement.

The MasterCard Aid Network circulates a version of their plastic cards, resembling prepaid or gift cards, in disaster-stricken areas. These cards are loaded with points that can be redeemed for, among other things, medicine, groceries and shelter, to ensure that donations are used where they are needed, and can be used within days, compared to the traditional paper voucher system. The system can function without an internet connection.

Ecomagination is General Electric’s sustainable-business strategy, which has been running for the past 11 years. Its aim is to invest in clean tech, like the Digital Wind Farm – that can boost energy production at wind farms by 20%. This strategy has proven to not only be beneficial to Mother Earth, but also to the company itself, as Ecomagination products have generated 13 times the income of its investment in research and development in 2015.

Intel Teach is a project that aims to help teachers use technology in their classrooms, ensuring that STEM (science, technology, engineering, and math) skills are taught to the next generation of innovators. Thus far, the programme has trained more than 15 million teachers globally.

Clearly, paying it forward is the way to go if you want your business to be successful and sustainable in the long term, and if you want to be taken seriously in the business world today.