As a small boy I use to tell my entire family that one day when I am all grown up, I will have enough money to take care of everyone. On my birthday, a few days ago, I got a call from my grandmother and she jokingly reminded me of the innocent promise I used to make.

I realised that as I am approaching my thirties, I am starting to feel a mix of guilt and shame about the fact that I am not yet near the point a younger me imagined I would be – some days I struggle to keep my own household and business afloat, let alone take care of anyone else.

I come from a family quintessentially made up of civil servants, military officers, police officers, teachers, a social worker, etc.

While I have the world of respect for all types of careers (especially those offering vital public services) it was not the path I chose for myself. Sure, these might have been safe career choices for the baby boomers, but I am part of a new generation – a generation with more opportunities than any other. We have access to an array of careers and job types that did not exist a few decades ago.

Even though 30 is the new 20, one cannot help but think about the fact that when my parents were my age, they were already raising two kids (with a third on his way). My grandparents were even younger when they went all “adult” on the world.

Some studies suggest that the average age of first-time home owners in South Africa is 35, while only a couple of years ago that number was 28.

Millennials are often described as a greedy and lazy generation who can’t keep a job, and therefore constantly change career paths, while their only social activities takes place on TV and smartphone screens.

Previous generations had world wars and massive global revolutions. Why, then, does it seem like this generation now struggles more to get ahead in life than their predecessors did? If you are like me and you often feel embarrassed or feel like you are leaving a nasty (broke) stain on your family’s legacy, then you might want to consider these facts that are contributing to the world in which we are expected to make a living:

6.5%of all people ever born are alive right now! In 1970 there were almost half as many people on earth as there is today. If you graduated high school in the year 1980, then there were just over 29 million people alive in SA the day you started your adult life. Fast forward to 2005, and there are 48 million people living in SA. (Today that number is close to 55 million.)

The point is, we are living and working in a world that has way more mouths to feed than any other generation before had. The competition and struggle for resources are simply more intense.

2. Technology also brought its own pitfalls

One of the benefits of technology is the fact that industries can recruit employees from basically anywhere. The flipside is that you are now competing with a much larger workforce. Not only is the world population bigger, but anyone can work anywhere, anytime. A couple of decades ago you were likely to find a job through adverts in local newspapers, or by talking to people within your community.

Today, I can sit in Sandton and apply for a job in San Francisco. I can find the advertised vacancy on a company’s website, email my CV, have a Skype interview, and even end up working remotely. As a result, the amount of applicants that you have to compete with is substantially higher than a few decades ago.

3. We are smart enough to know anything can happen

You know how they said that the Titanic would never sink? Well, we have seen the movie and we know what happened. There was always this one thing that every generation believed to be an absolute. That one thing that was said to last forever – the Roman Empire, the housing market, the stock exchange.

Over the decades the world has seen on more than one occasion how an absolute construct self-destruct, or simply disappear into oblivion.

Our generation is categorised by change. Change is part of our DNA. We are almost always anticipating it. We expect that things will be very different 10 years from now.

As a result, gone are the days of elaborate corporate functions, ridiculous bonuses and overseas trips and fancy cars as incentives. Businesses have also learned that change is always around the corner, and they have to be prepared. Sure, the general state of the economy also doesn’t help, but the ever-lurking possibility of change is forcing businesses to hold onto their profits for longer.

Technology brought with it a lot of new careers and opportunities. At Counting Coins, we often discuss the value of technology for entrepreneurs. Unfortunately, technology and innovation also constantly replaces jobs, and more often than not, the new jobs they create do not make up for the ones that are lost.

As an example, 30 years ago, accepting a job at the post office was considered a safe choice.

We know that inflation pushes prices up, but unfortunately for the current workforce, salaries do not always keep up with the rise in living expenses.

On average, the houses bought by millennials in the US cost at least 2.6 times their annual income. In the 70s, house prices was on average only 1.7 times the annual income of buyers.

A report by Stats SA in 2015 showed that for the past couple of years, the inflation of education cost has constantly outstripped general inflation.

More and more reports suggest that most of our other basic needs are getting more and more expensive, even when you adjust the pricing for normal inflation. 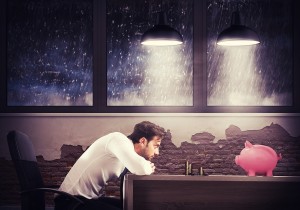 6. If you have debt, you are not alone

It is a well-known fact that millennials are the most indebted generation ever. A 2015 Wall Street Journal suggested that two-thirds of millennials have at least one source of long-term debt. In the same study, at least 54% percent of millennials older than 30 who have received tertiary education have still not repaid all of their student loans.

The point is this: There is hope. You can save your finances and live the life you want. Before you can get there, however, you have to get rid of shame and guilt. No matter what your age, you have no reason to feel ashamed of where you are. Do not compare yourself with anyone else (or any one before you). Most importantly, always remember, you are not alone.