After much warning, ratings agency S&P Global Ratings has downgraded South Africa to sub-investment grade on Monday, 3 April 2017. This comes only days after President Jacob Zuma made the highly unpopular decision to sack Finance Minister, Pravin Gordhan, and his deputy, Mcebisi Jonas.

Junk status became a buzz word in South Africa in June of 2014, when Standard & Poor’s first downgraded South Africa’s sovereign foreign currency rating – which is what determines the creditworthiness of the country – to BBB-, which is only a single level above so-called “junk” status. Fitch lowered its ratings outlook for South Africa to negative on the same day, following suit from Moody’s negative outlook in 2011.

When news broke of a fraud case being brought against Pravin Gordhan in 2016, speculation that president Zuma has his knife in for the finance minister became even more rife, and the threat of the country being downgraded to junk status emerged from its cave once again.

When a country is downgraded to junk status, it essentially means that the country is not a “good” or “stable” place to invest. This doesn’t simply mean that investors are merely hesitant to invest in a country (which they are), but that many professional investors, like asset managers and hedge and pension funds, are obstructed from investing in a country by policy, not just by choice.

We have already seen the rand reacting to the news of the downgrade. A weakened rand will likely lead to higher inflation rates and increased interest rates by the South African Reserve Bank, which has an immediate effect on consumers, as the cost of borrowing money becomes higher. Considering South Africa has some of the highest debt levels among developing countries and emerging markets, this is not good news. Junk status leads to a vicious cycle of borrowing more to repay debts that are already owed, both domestically and internationally.

Austerity measures are often taken to soften the blow of junk status – this means that higher taxes and spending cuts are necessary to reduce budget deficits and restore investor confidence. Still, living costs will probably increase, with increases in food, fuel and transport prices.

Getting back to investment grade isn’t something that happens overnight – the average time it takes for a country to recover and restore investor confidence is approximately 7 to 8 years.

So, what is the normal South African consumer to do in these potential lean years?

• If it is at all possible, avoid making debt. Check out these and these tips.
• Even if you’re in the lucky position where you haven’t really ever had to set up a budget, start doing so now. Find tips here, here, and here. And save!
• It takes a little more effort, but shop around for deals and compare prices. 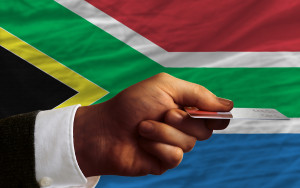