I have this friend who can change the world before 6am, my partner can do dishes, laundry and make breakfast by the time the first rooster crows, and my sister insists that the best time to work out is before the sun is up.

I, on the other hand, can sleep on a rock in the middle of a desert, and still push the snooze button.

We live in a world designed to favour morning people. Most companies start the work day from 8 in the morning, and having a 9am meeting is nothing unusual, while a 9pm meeting is just rude.

A multitude of famous entrepreneurs and business people often gloat about how much work they get done before the world wakes up.

Early birds catch the worm. Or do they?

Why are you a morning or night person?

I regularly hear people say that they don’t mind getting up early, seeing has they’ve been doing so their entire lives. If sleeping patterns are purely based on habit, then why, after 12 years in school and a decade of having a day job, do I still hate everything that comes before my second cup of morning coffee?

According to Katherine Sharkey, MD, PhD, assistant professor of internal medicine and psychiatry at Brown University, we all have an internal 24-hour clock that can be affected by a number of aspects.

Everyone has a natural cycle, their circadian rhythm, which tells your body when to sleep and when to wake up. Some people have a slightly longer or shorter natural cycle than others. According to a study by genetics company, 23andMe, this internal clock can also be influenced by genes. 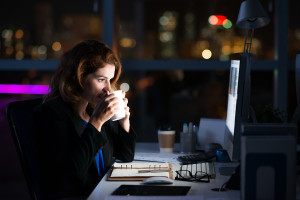 Are there any benefits to being a night owl?

We are generally aware of the benefits of being an early riser. We can see those benefits through our droopy eyes, when we drive past them on their early morning run. Early risers are generally seen as being more proactive, and numerous studies indicate that they are less prone to addiction.

Luckily, your success does not have to be determined by what time you decide to get out of bed. There are plenty of worms for everyone:

Benjamin Franklin famously said “Early to bed and early to rise, makes a man healthy, wealthy, and wise.” While philosopher Aristotle declared “It is well to be up before daybreak, for such habits contribute to health, wealth, and wisdom.”

There are, undeniably, benefits to rising with a smile on your face. That is, however, not to say that success and happiness are exclusively reserved for early birds. While some people get loads done in the quiet times before the world wakes up, others get just as much done after the world has already gone to bed.